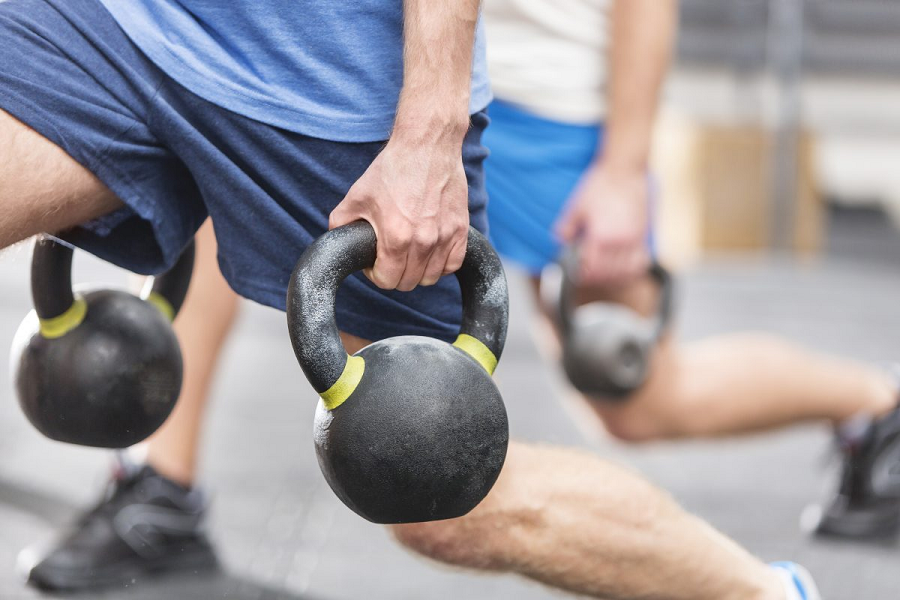 In recent years, yoga has become more and more popular as an effective work-out routine, and it is little wonder when we consider all of the physical benefits that this activity can bring. However, for those who want to ramp up their time on the mat to the next level, introducing a kettlebell to your practice may be just what the doctor ordered.

Why Combine The Two?

It may seem a little odd to combine two things that are seemingly at opposite ends of the fitness scale, however, it is thought that blending these two opposing activities can result in an unlikely outcome – one may complement the other. Think Yin and Yang.

Whilst there is a lot of focus on stretching and flexibility in a traditional yoga class, the addition of the kettlebell allows athletes to build strength and endurance alongside this. It’s no surprise, then, that this new-fangled workout is taking the world by storm.

What Happens When Yoga And Kettlebell Training Meet?

The kettlebell originally came from Russia whereas yoga was developed in East Asia thousands of years ago, so not only do these exercises complement each other in a physical sense, they are also bringing together the fitness knowledge of two completely different cultures.

We have established that these two forms of exercise can work well together and when we look at the benefits of each, it is not difficult to see why. For example, if you were to spend sixty seconds in a warrior 3 pose – standing on one foot whilst leaning the torso forwards and the lifted leg backward, you’d certainly work on your balance, focus, and core strength but when you introduce a kettlebell into this pose, a whole new world of fitness is unleashed. Your core, for one, is going to have to work extra hard not to mention the benefits to those biceps and triceps.

What’s more, whilst there is limited evidence to support kettlebell training as an effective workout alone, there has been some suggestion that the activity can promote greater power, improved core strength, and better agility in addition to improved aerobic performance. Most people certainly wouldn’t have initially associated these benefits with a weight-lifting exercise whereas they are very closely linked to yoga – further proving that the two combined, make for a powerful duo.

Even more exciting is that this hybrid workout is being hailed as the new weight-loss routine thanks to its ability to burn as many as 500 calories in a single session. During a workout, you can expect to work on all of the major muscle groups, providing you with, perhaps, your new go-to routine. Furthermore, fitness instructors are claiming that kettlebell yoga will leave you feeling balanced and strong which can’t be a bad thing.

What Does It Involve?

Quite simply, introducing a kettlebell to your regular yoga practice involves handling the kettlebell during your workout and using it to build strength as you move through a vinyasa flow or any other form of yoga. The idea is that bringing the two together can help you to achieve the benefits of both in a much shorter time frame.

For the most part, your kettlebell yoga routine will last for between 20 and 60 minutes depending on the results you want as well as your personal fitness level. More and more kettlebell yoga classes are appearing in yoga studios, however, you won’t see as many in a gym setting, so it pays to approach your local yoga instructor for your first session.

Kettlebell yoga can be done during a variety of poses to build strength such as in the lifted arm of a half-moon pose which will also greatly improve your balance but some people may prefer a slightly different approach – doing a short burst of yoga followed by a short burst of kettlebell training and alternating between the two. However, no matter which path you choose to take, it is recommended to practice the two separately before marrying them into one workout and always be sure to stretch out before your routine.

If you have become bored with your usual yoga routine or your body is crying out for something a little more aggressive, why not combine vinyasa flow with the weight of the kettlebell?

Classes for this type of yoga are popping up all over the world as its popularity increases and it isn’t hard to see why when we look at how combining the two activities into one gives ways for a modern workout that targets strength, flexibility, balance, and aerobic prowess all in one! Click here for more about kettlebell yoga.

Looking for Health Professionals in the MedSpa Field