How to Solve Your Sitting Problem? 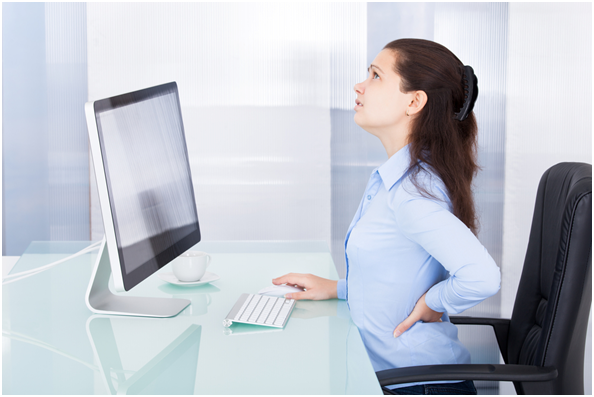 First and foremost, many millions of us have jobs that require us to sit for extended periods during the day. Moreover, when we get home, it’s not much different. In fact, we may end up sitting on the couch watching television, or on the cell phone, or working on the computer or simply socializing and relaxing.

How Common is the Problem?

Negative Consequences of Sitting Too Much

Sadly, many of us may be totally unaware, but all this sitting is not good for us.

In addition, excessive sitting weakens our core muscles. As a result, it’s hard to sit up straight. And, unless you try to sit up straight, you are more likely to slump over your desk. Therefore, to counteract these problems and keep your muscles engaged, stand up and stretch throughout the day.

Also, poor posture weakens your muscles and leads to back and neck pain. As a result, you are more prone to injuries. Furthermore, sitting too much causes you to lose muscle strength which results in a stiff back. And, a stiff back may prevent you from sleeping well.

Finally, sitting too much slows down your metabolic rate which, in turn, causes you to gain weight. On the other hand, you can counteract the weight gain problem by having a healthy diet, cutting back on your food intake, and exercising regularly.

Meanwhile, a 2016 study, of a million people, by the Norwegian School of Sports Science reported that one hour of moderate activity a day overcomes the negative effects of sitting. In fact, the study found that people who were sedentary for eight hours and had one hour of physical activity had a much lower risk of negative consequence. On the other hand, people who didn’t sit 8 hours but were not physically active had a higher risk of negative consequences. Thereby implying physical activity really does help negate the impacts of sitting.

Next, another 2016 study by researchers from the University of Leicester, used data from England’s 2008 Health Survey. And they found that people who exercise regularly do offset the negative effects of sitting all day.

In addition, they found that those who led a sedentary lifestyle, and did not meet the exercise guidelines, had the highest risk for diabetes and heart disease.

In the meantime, those who did not exercise regularly but had an active lifestyle had higher levels of HDL (good) cholesterol.

Furthermore a 2014 study by researchers at Indiana University in Bloomington reported that taking a five-minute walk every hour helped increase muscle activity and blood flow in participants who sat for three hours.

Next, an analysis of 13 studies, involving one million people, found that those who sat for more than eight hours a day without any physical activity had a risk of dying that is equal to the risk of dying because of obesity and smoking.

However, the analysis also showed that 60 to 75 minutes of moderately intense physical activity a day counteracts the effects of too much sitting.

Lastly, another study found that sitting time wasn’t a mortality factor for those who were most active.

So, What Can You Do?

First and foremost, if you must sit, take a break and get up every thirty minutes. Regrettably, finding time for physical activity may not be an option for everyone. In which case, you can mitigate some of the bad effects of sitting by moving your legs using under desk steppers. Moreover, you can use these steppers while you are working at a desk in the office, or, working at home. In addition, you can use these steppers while you are watching TV, reading a book, or talking on the phone.

What to Expect When Getting Orthodontic Braces?